Audio
Click on the arrow to begin the audio.

Catherine Vandemoer, otherwise known as 'drkate', is a natural resource manager having completed her academic training in geology, hydrology and watershed management. She completed her Bachelors degree at Smith College and received a Ph.D. in Watershed Management from the University of Arizona in 1988. For more than 25 years she has dedicated her services to working for and with American Indians helping to identify, secure and management Indian water rights. Drkate is president and CEO of her own company focusing on the management and protection of watersheds and water resources.

Kate is a naturalized American citizen, having been born in Mexico to one American parent and a foreign father. She has lived in the United States since she was 3 years old, and took her oath to the United States at age 18. Kate has known since she was 8 years oldshe could not be President ever because of her father's citizenship and birth outside the U.S. She never gave it another thought until Barack Hussein Obama ran for the Presidency...and she knew something was wrong. 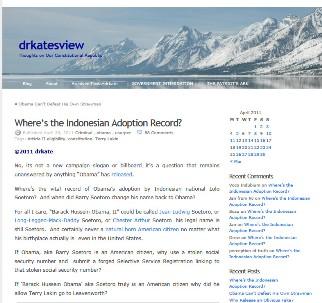 Kate started blogging in 2008 and started her own blog, http://drkatesview.wordpress.com in August 2009. The blog has focused on the U.S. Constitution and violations thereof, and more specifically on the Constitutional crisis the US is in given an ineligible commander in chief. Drkate's Revolution Radio has been on air for over a year and focuses on constitutional governance. During this time period she has written over 400 articles on the constitution and Mr Obama's ineligibility for the Presidency.

Dr. Kate attended the Lakin Courts Martial in support of Terry Lakin, reporting first hand of Mr. Lakin's courage in the face of betrayal by his chain of command, the putative President, the media, and Congress.

Here are the chronicles of that work:

http://drkatesview.wordpress.com/2010/12/14/standing-with-lt-col-terry-lakin/ I physically stood when Lakin was "found" guilty...by condemning Lakin, they have condemned Americans and our Constitution

http://drkatesview.wordpress.com/2010/12/18/courage-and-betrayal/ The day Lakin was betrayed by America, and his own legal counsel. I was very distressed by the courtroom proceedings against Lakin and view them as patently unfair, even within the UCMJ

http://drkatesview.wordpress.com/2010/12/19/military-court-hears-doubts-of-obamas-eligibility/ The unbelievable courage shown by Lt Col Lakin to get this before a military court...and the military court failed America

http://drkatesview.wordpress.com/2010/12/21/the-intellectual-dishonesty-of-the-eligibility-deniers/ The complete intellectual dishonesty of everyone who denies there is a problem with Obama's eligibility

http://drkatesview.wordpress.com/2010/10/13/terrorists-have-more-rights-than-army-ltc-lakin/ The jailing of an Army officer and giving terrorists who kill Americans a pass... (!!!!)

Be Sure to Visit America's Web Radio