Click on the arrow to begin the audio stream:

Pamela Barnett is a key player in the Obama Constitutional eligibility controversy – Obama supporters would disparagingly refer to her as a "birther". She is the lead plaintiff in Captain Pamela Barnett, Ambassador Alan Keyes et al v. Obama which has oral arguments at the 9th Circuit Court of Appeals May 2, and she is representing herself in Barnett v. Dunn which intends to force the state of California to vet Obama's Constitutional qualifications.

Barnett has researched Obama's Constitutional eligibility and the vetting process of federally elected officials (U.S. Senator, U.S. Representative, and President of the United States) for 2.5 years. Her soon to be released book – Never Vetted/ Unlawful President – The Loophole in Our Democracy - presents a great amount of research that she has accumulated (click here for a full summary of the book). This book gives the reader the opportunity to make a decision on the evidence regarding Obama's Constitutional eligibility (or lack of) and spotlights a major failure in the integrity of our elections. 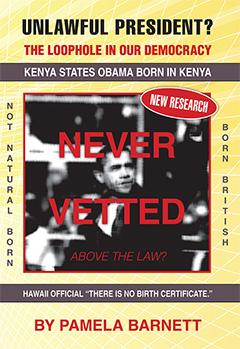 Barnett was a military journalist, public affairs officer, communications platoon leader, battalion intelligence officer, training and deployment officer, and a company commander of a training unit. She deployed twice to Southwest Asia. She has always been a curious person, and she always wanted to know "why" and "how" something happened. Barnett has always been willing to jump in and help a worthwhile cause and she saw that no one in any official capacity was doing anything about Obama's lack of eligibility. Most importantly she wanted to honor her life-long military officer oath to defend the U.S. Constitution.

Barnett attended the court martial of Lieutenant Colonel Terrence Lakin and the citizen trial in Harlem which convicted Obama of Sedition and multiple fraud crimes.

Barnett has her soon to be released book Never Vetted/Unlawful President as a Facebook page, a website www.unlawfulpresident.com and a new Twitter account pamelabarnett. She will be giving updates at these locations on her book release date.

"I cannot think of any other subject in recent American history that has been so mired in controversy, so factually misrepresented, mischaracterized and so misunderstood than the matter of the eligibility of Barack Hussein OBAMA II to hold the offi ce of President of the United States. Despite its importance, the topic has been summarily dismissed as fodder for conspiracy theorists by many, while others insist that the question of OBAMA's citizenship has been "asked and answered." But has it really been answered, and if not, why not?"
Douglas J. Hagmann, Director of the Northeast Intelligence Network

"....how could a young man born here in Kenya, who is not even a native American become the President of America?"
James Orengo, The Kenyan Minister for Lands (3/25/2010)

"There is no birth certificate (for Barack Obama in Hawaii). It's like an open secret. There isn't one. Everyone in the government there knows this."
Tim Adams, Senior Elections Clerk for City and County of Honolulu in 2008

Be Sure to Visit America's Web Radio