On March 14 2011, at 3p Eastern, we continue the TLAF Radio show with Sharon Rondeau

Click on the arrow to listen to the audio.

March 14, 2011: An Interview with Sharon Rondeau: Sharon Rondeau assumed the ownership and operation of The Post & Email, an electronic newspaper incorporated in the state of Wyoming, in March 2010 when its founder, John Charlton, moved on to other pursuits. The Post & Email is a "new media initiative of American patriots, aimed at breaking the blockade imposed by the Main Stream Media in the last election cycle."  Sharon has worked in the fields of job training, insurance and education and is a professional freelance harpist who studied at the Eastman School of Music. In 1998 she released a CD, and in April 2009 a book of her Scottish arrangements was published by Mel Bay. She has performed for Sarah Ferguson, the Duchess of York, and at Carnegie Hall as a member of a university ensemble. 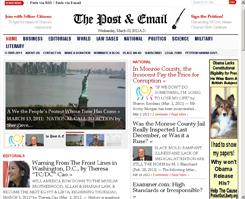 Sharon is caretaker for a disabled adult son who is neurologically-impaired with seizures and diabetes. She began searching for information on Obama's eligibility after reading about the doubts raised by Atty. Philip Berg in June 2008. Having found The Post & Email by accident in the fall of 2009, she joined its staff as a writer shortly afterward. She became Managing Editor in January 2010 and Editor in March upon Mr. Charlton's departure. Her goals for the newspaper are to expand its readership to 1,000,000 readers monthly, to see Obama's complete life story released to the public, and to document the cleansing of corruption in government at all levels beginning with the re-emergence of local constitutional grand juries fulfilling their purpose of being a check against judicial activism and tyranny. Her personal goal is to assist in reestablishing the U.S. Constitution as the foundation of American government and society.