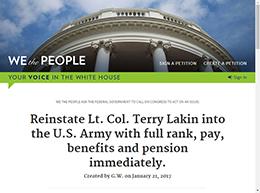 The Petition is Now Closed: Thank You for Your Support

The Petition is Here:

When Dr. Lakin challenged Obama's constitutional standing to be president, there was no evidence to substantiate the claims of the Democratic Party. Subsequently the White House released a certificate of live birth (also not a legally valid document) which was quickly proven a forgery. After Mr. Trump made this an issue (as he stated during the campaign) the White House released the long form birth certificate, which has also been conclusively proven a forgery.

Therefore, we are exactly where we started: No valid legal documentation of Obama's Constitutional eligibility.

Logically Obama should have pardoned Dr. Lakin since Obama (through the White House) claimed the long form was valid proof, which was not forthcoming when Dr. Lakin made his initial requests.

It is our position that Dr. Lakin took a principled, rational, and well-thought-out action to protect the integrity of our Constitution. He was not in the street being shot by water cannons or part of mass actions. He is one man who has stood alone to defend a key provision of our Constitution. He should be rewarded for his stand, not punished.

Terry acted on his oath of an officer to an order higher than his charges: "To protect and defend the Constitution against all enemies, foreign and domestic."

Terry Lakin stood for his oath to the U.S. Constitution, his prime-directive as a Commissioned Officer in the military – to support and defend the U.S. Constitution against all enemies of same. The Constitution is the supreme law of the land and trumps all unlawful orders. Terry was quickly and summarily punished without being permitted to present to the court and court martial panel the exact reason and evidence as to why he disobeyed orders for military deployments directed by Obama via Obama's speech at West Point. Terry considered this order unlawful given the facts in hand and due to the lack of any meaningful investigative response to his questions and concerns sent to higher military authorities and the U.S. Congress by former Lt Col Terry Lakin and others. Terry decided he had to stand up for his oath to the U.S. Constitution and to defend the same. For standing up for his prime directive and supreme order, his oath, he was punished for disobeying a lesser order and not being allowed to explain to the court why.