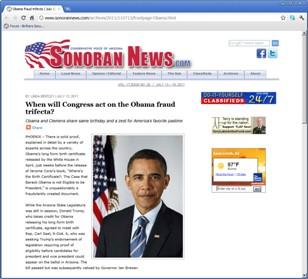 PHOENIX – There is solid proof, explained in detail by a variety of experts across the country, Obama's long form birth certificate released by the White House in April, just weeks before the release of Jerome Corsi's book, "Where's the Birth Certificate?: The Case that Barack Obama is not Eligible to be President," is unquestionably a fraudulently created document.

While the Arizona State Legislature was still in session, Donald Trump, who takes credit for Obama releasing his long form birth certificate, agreed to meet with Rep. Carl Seel, R-Dist. 6, who was seeking Trump's endorsement of legislation requiring proof of eligibility before candidates for president and vice president could appear on the ballot in Arizona. The bill passed but was subsequently vetoed by Governor Jan Brewer.

There is also solid evidence Obama is fraudulently using a Social Security Number, issued in March or April 1977 to an 87-year-old Connecticut resident, while Obama was attending high school in Honolulu.

The Social Security Administration, however, has claimed the number Obama is currently using has never been issued.

However, that Connecticut-issued Social Security number is also imbedded in what has been proven to be Obama's fraudulent Selective Service System registration, which was created in September 2008, not July 1980, because Obama's failure to register would have forever precluded him from obtaining employment with the executive branch of the federal government, which includes the post of president of the United States.

It's a fraud trifecta, easily proven by experts of their choosing, yet Congress is silent, defiant and refuses to deal with provable issues.

The military remains indifferent as well, while all the facts point to its Commander in Chief being a usurper.

The military, instead, used its political clout to crucify Terry Lakin, a decorated career Army flight surgeon, with a court martial that shipped him off to prison and left him stripped of his career, because he was unable to find out through his chain of command if Obama was eligible to hold office and issue legitimate orders as Commander in Chief.

After all, Lakin was asked to produce his own birth certificate before the Army would ship him off into harm's way, while his oath as an officer was to defend the Constitution, which included disobeying unlawful orders.

Meanwhile, Americans have been captivated for weeks by the Casey Anthony murder trial, which resulted in verdicts of not guilty, except on four misdemeanor counts of lying to law enforcement.

However, while Casey was at bat, acquitted of capital murder, aggravated child abuse charges and sentenced to time served on the misdemeanor charges, seven-time Cy Young Award winning pitcher William "Roger" Clemens was waiting on deck with jury selection underway.

Clemens is charged with one count of obstruction of Congress, two counts of perjury, and three counts of making a false statement connected with the congressional hearings by the House Government Reform Committee in 2008 regarding the use of steroids in Major League Baseball.

In other words, Clemens, whose name was mentioned 82 times in a report detailing the sport's pervasive steroid problem by former Senate Majority Leader George Mitchell, is being accused of what seems to have become America's favorite pastime, lying.

The federal government aims to prove Clemens perjured himself when he testified before Congress that he had never used steroids or human growth hormone.

But where is Congress on the trifecta of fraud perpetrated by Obama?

The irony is not lost on Clemens and Obama sharing the same birthday, Aug. 4, and their apparent zest for America's favorite pastime.