The Freedom Club Ad from the Washington Times 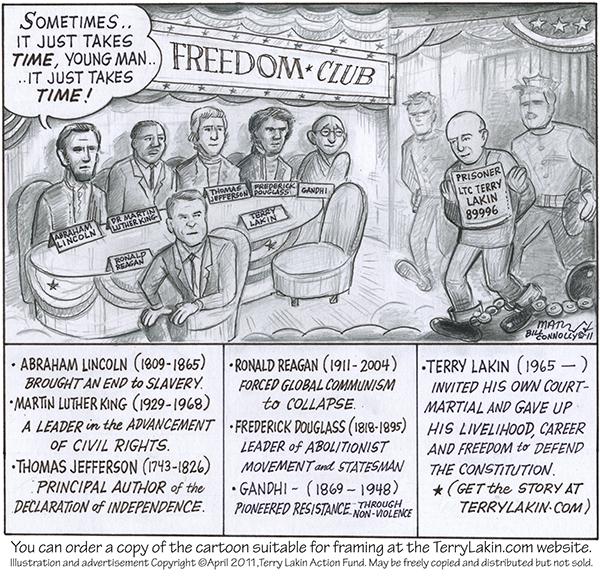 All Terry Lakin wanted was confirmation of Obama’s Constitutional eligibility.
Instead Terry got six months in prison, loss of rank, pension, benefits, and pay.

Throughout history unique individuals have taken the reigns of freedom and stepped out to confront injustice and actions that destroy human dignity and the rights of the individual. Out of this struggle came our Constitution, and the documents that followed. It has created the most free, most powerful and most prosperous and generous civilization in history. The Constitution is a brilliant summation of the best way for flawed humans to govern themselves in an orderly and productive way. Its precepts have served us well and must not be so easily discarded.

LTC Terry Lakin chose to selflessly defend the Constitution as is his sworn duty as an officer and a citizen. All he wanted was confirmation of Barack Obama’s constitutional eligibility. Instead he got six months in prison, loss of pay, loss of pension, and loss of rank.

Terry has given up everything to defend our Constitution. He and his family need your help now. Please visit the Terry Lakin Action Fund website for more information. Consider making a contribution today. Support Terry and his family today.

Get the Facts. Visit TerryLakin.com Today.

You can order a copy of the cartoon suitable for framing at the TerryLakin.com website.
Illustration and advertisement copyright ©April 2011 Terry Lakin Action Fund. All Rights Reserved. May be freely copied and distributed but not sold.