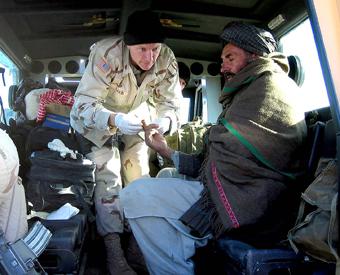 Dr. Lakin treats an Afghan injured during land mine disposal operations in 2005 in Afghanistan.The Terry Lakin Action fund has been established to directly support Terry's legal efforts and future work. and is authorized by Terry Lakin. The trust was formed by counsel and is registered in the state of Texas and was signed and notarized on Nov 15, 2010.

Terry will never recover the huge amount of personal and financial losses incurred in this case and subsequent incarceration. However, he is now working and settled back into a normal life.

Hi only request of the many who supported him in is efforts is that they buy a copy of his book. Any ongoing contributions to the trust will be use for future efforts and causes in which Terry participates.

Note that the Trust is not a charitable organization therefore your contribution will be considerd a gift, and not a donation.

Why Terry's Case is Important

Terry's case brought and has kept the presidential eligibility issues in the front of the public and press. From his first video that started his story, and his second video describing the unusual circumstances of being denied all discovery and access to witnesses, his case has become part of every discussion of this issue. He was derided on CNN, covered by every major paper and media outlet, and even brought the issue to late night TV comedy.

Terry has been criticized by some for his actions. They state plainly that he disobeyed orders and should simply accept the results. They believe that his pursuit of confirmation of eligibility should have been unrelated to his service. The facts of his case are plain. He did disobey and was fully cognizant of the potential results. However, after exhausting all possible means of resolving this through existing army procedures, he felt he had no choice but to bring this case to public. Please read his letter from prison to hear it in his own words.

His resolve has not changed. He still believes the issue is critical to the strength and authority of our Constitution. Terry contributed greatly to the visibility of this issue and will continue to do so. He has sacrificed everything he's worked for. He has given up his liberty, his income, and his retirement. His future is uncertain. He did this because he believes that the truth and Constitution matter.

Terry is stood up for the nation. He wants the nation to know why.